Zimbabwe is one of Africa’s major big game hunting destinations and Pete Fick is one of Zimbabwe’s best known, most respected professional hunters. You can hardly think of a major area in that country where Pete Fick has not hunted professionally or worked on problem animal control and culling. The phrase “cut to the chase” originated with the silent film industry as a direction to film editors when wanting to move quickly from obligatory sequences to more exciting chase scenes or final acts. Along the way it came to mean: focus on what is important, get to the point and, later on, to pursue with intent to capture or kill. In the big game hunting industry it is a familiar phrase. 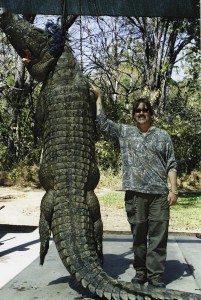 As you will learn, Pete Fick is a Professional Hunter who believes in the philosophy of cut to the chase. As a young man he was influenced by the riveting stories of his Uncle Willem, some of which are included here. After school he joined the Parks Department where he became proficient at culling elephant. The stories he relates about this part of his big game hunting career are fascinating. It is interesting to note how culling and hunting have their own different rules of engagement. During his time with the Game Dept. he shot over 1,000 elephants plus many buffalo, lions and leopards. He had more than his share of charging elephants, as well as mishaps when the professionals culling charging elephants sometimes got their signals crossed. Exciting stuff, indeed. However, after a while he became disillusioned with politics and government red tape. His Parks days came to an end when he decided to become a professional hunter. 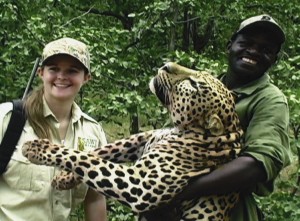 For many years Pete worked for well known safari companies (Hunters Safaris and Mokore Safaris) hunting in Chewore, Matetsi, Ngamo, Kazuma and Save Valley. He built up a lengthy list of repeat clients as well as bringing on new ones. In some cases he hunted with three generations of big game hunters from the same family–so satisified were the clients. 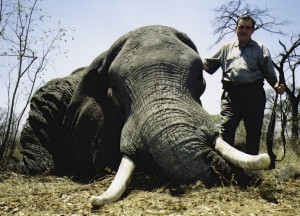 These successful large safari operators had many hunting areas and Pete was familiar with all of them. In addition he hunted in Mozambique taking clients to game rich areas. (He had done hippo culling in Mozambique earlier in his career.)

To paraphrase Barrie Duckworth’s Foreword: Pete has many nicknames but two stand out. Trackers call him GAZI, meaning blood; Pete is always happy when there is blood in the back of his hunting truck. Barrie also calls him TSETSERE, honey badger, because he is stubborn, tenacious and always willing to go the distance. 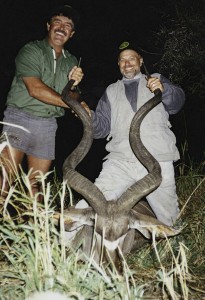 The vast majority of Pete’s stories are about hunting dangerous game, the kind that make good telling in print form, especially when the animals don’t cooperate. As well there is one story about the proverbial “client from hell”–all PHs have them once in a while. And there is a moving story about the death of his long term tracker, Jorrum, who was killed by an enraged elephant. This happened while out hunting with two of his favorite clients.

Then, after 30 years in the field, Pete decided to go on his own. His first efforts at securing a hunting block in Mozambique did not work out but he wound up on top of the heap when he was able to establish a relationship in the Bubye Valley Conservancy, an area over 1,000,000 acres all under one umbrella, with seven camps established to service safaris, and, of course, amazing big game populations. 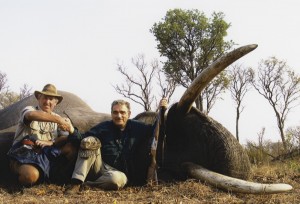 Sure, there are many hunting books authored by professional hunters in Africa. But there is nothing quite like CUT TO THE CHASE. It’s a book you will enjoy no matter where you are hunting. But, if you ever plan to hunt in Zimbabwe, this is a MUST. So, cut to the chase and fill out the order form below.

Pete Fick’s Cut to the Chase

A COPY OF OUR BOOK LIST (OLD AND NEW BIG GAME HUNTING BOOKS) WILL BE SENT FREE WITH ORDER.